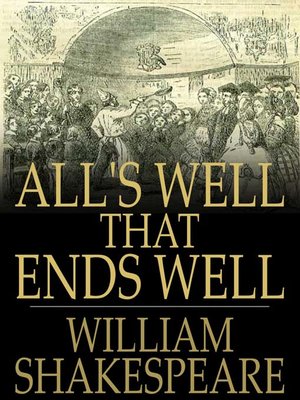 All’s Well That Ends Well is a comedy play written by the most influential English playwright, William Shakespeare. This play has not accumulated much success as other comedies of Shakespeare did, such as As You Like It.

The plot of the play actually portrays that how far can a woman do to win his love. The main character of the play is Helena, who is the orphan daughter of a famous physician. She lives with Countess of Rousillon as her ward and has a fondness of her son, Count Bertram. Helena was aware of the fact that she cannot win the love of Bertram as she is of low birth and he belongs to a noble family. Bertram has been sent to the court of King of France. Until know Bertram does not know about the feeling of Helena from him. One day Helena has been called to France to cure The King’s illness as she has skills and arts of her father. The Helena cures the King and in return, King asks her to choose any man in the realm and promises her that the hand of the chosen man will be given to her. Considering the opportunity, she chooses Bertram. As King orders Bertram to marry Helena, he has no choice but to agree and marry. However, he does not like her and shortly after their marriage, he flees France. He then joins the army of the Duke of Florence with a scoundrel named Parolles.

Helena is sent back to the Countess. The Countess loves Helena and is sad about what has happened to her. There Helena receives a letter from her Husband in which it was written that Bertram has not loved her and does not intend to spend his entire life with her. Moreover, he puts tow condition on which he can accept her as a life partner. This first one is that if she gets his family ring that he has with him and becomes pregnant. After reading the letter, the distressed young girl left Rousillon to make a religious pilgrimage.

When Helena reaches Florence, she finds out that Bertram has become a general in Duke’s army. Moreover, she finds out his intention to seduce the Diana, the daughter of a widow. Helena plots against Bertram with the collaboration of Diana. Diana asks the family ring of Bertram as a token of his love, which he gives her, and in return, she gives him a ring which belongs to Helena.