On 21 July 2017, soon after Anthony Scaramucci was appointed as White House communications director, White House Press Secretary Sean Spicer Resigned. According to sources, Scaramucci’s hiring was “the straw that broke the camel’s back” for Spicer.  Spicer told CNN’s Dana Bash: “I wanted to give the president and the new team a clean slate.”

Late on Friday, Trump said in a statement: “I am grateful for Sean’s work on behalf of my Administration and the American people. I wish him continued success as he moves on to pursue new opportunities: Just look at his great television ratings.” 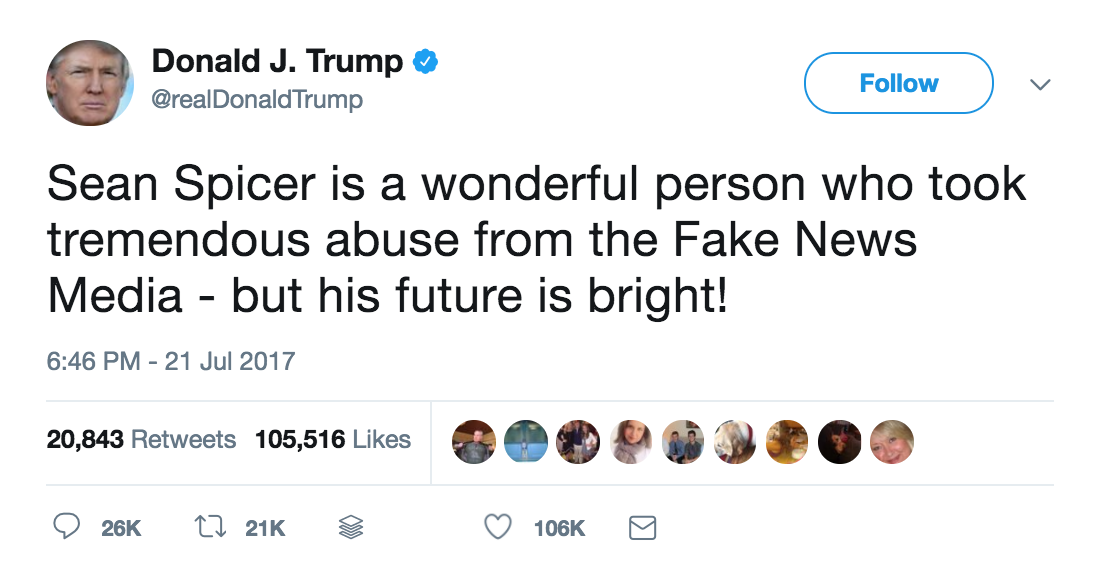 In a separate statement, Trump said of Scaramucci: “He has been a great supporter and will now help implement key aspects of our agenda while leading the communications team. We have accomplished so much, and we are being given credit for so little.”

At his first time appearance in the White House briefing room, Scaramucci praised Spicer for doing a “great job” and told the reporters that President Trump is on the right track and that there was some “media bias” against him.

Spicer Is Now The Happiest Man In The White House

According to Politico, on Thursday Sean Spicer looked happy as he spoke to the reporters on the White House lawn. When he was asked if Scaramucci was doing a good job, Spicer laughed and said, “I don’t think Anthony needs me critiquing him. He’s got a clean slate to implement the president’s agenda.”

Earlier in the week, he also showed us his new calm and happy state when he tweeted thanks to Jimmy Fallon for The Tonight Show‘s genius mix of Sean Spicer singing “I Will Survive.”